Santa and the Baby Jesus 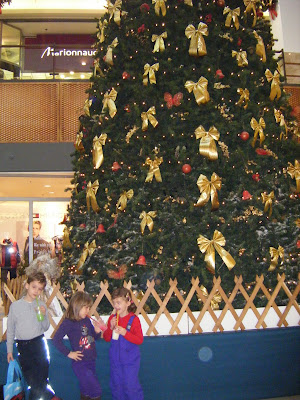 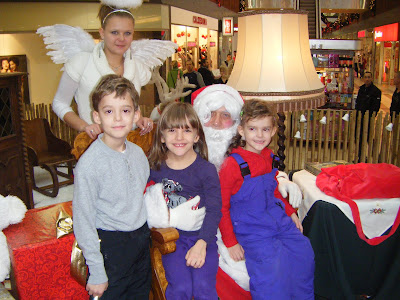 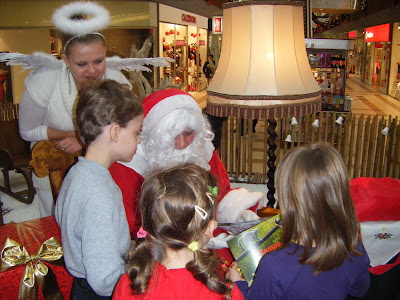 This will be our second Christmas in Hungary, and I am still learning about their holiday traditions. Having children makes this so much more fun. When we lived in America, I never told our kids that Santa brought presents, but we always had fun seeing him at the mall, and reading about the history of St. Nicholas. This week I took three of our kids to see Mikulash (St. Nicholas) at our local mall. Mikulash visited Elizabeth's kindergarten class, so Olivia really wanted to meet him also. Elizabeth told us that when he came to her class, she had to recite a poem the class had been working on just for this occasion. At the mall, I was surprised to see there was not a long line to see him, and he was dressed in the traditional red garb and white hair, and surrounded by angels, not elves. The few children before us took a very long time sitting and talking with Santa, and I wondered what they were doing. When it was our turn he asked us lots of questions, and I think he enjoyed talking to some American kids. Another surprise - he did not ask the children what they wanted for Christmas. Now I knew that in Hungary it is not Santa who brings the children toys on December 25, but the baby Jesus. Santa fills their boots with candy on December 6. But to see this conversation played out really gave me a cultural shock! Instead of asking the children what they wanted him to bring them, he asked them what they could say or sing for him! I had not prepared the children to sing a Hungarian Christmas song or poem and fortunately he asked if we could sing Jingle Bells. So, we all stood around Mikulash and began singing Jingle Bells, in English. Then, after we performed for him, he gave out the special Hungarian Christmas candy and a sticker book to each child.

One new Hungarian tradition that we haven't adopted is waiting until December 24 to put up our Christmas tree. We have found that it is such a great teaching tool for our family, and have used it to talk about it's history - St. Boniface, Martin Luther, hanging fruit on the branches, and of course stars and angels. Tradition here says that angels and the baby Jesus deliver the tree and presents on Christmas Eve, and usually only the adults put the tree up in secret to surprise the children. We hope that JESUS will be exalted during this Christmas season and that many will realize that the baby Jesus is actually IMMANUEL - GOD WITH US. Not a baby anymore, not still on the cross, not still dead in the tomb, but a risen SAVIOR, living and interceding on our behalf to God our heavenly Father.

Email ThisBlogThis!Share to TwitterShare to FacebookShare to Pinterest
Labels: Holidays, Life in Hungary