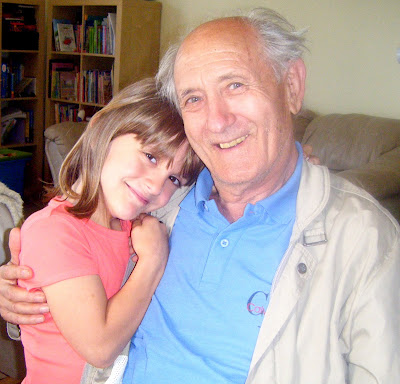 Almost one year ago, Monte missed the bus and had to wait for the next one. While waiting for the next bus, an elderly man walked up to wait for the same bus. They began a conversation and continued it after boarding the bus. Then the bus was stopped because of an accident ahead on the road, which caused the bus to take a thirty minute detour. They had more time to talk because of the delay, and they became friends, exchanging phone numbers. Gyuri (pronounced Jury in English) is Hungarian but lives in Norway, and travels back and forth for various reasons. Even though Gyuri was agnostic, he acknowledged that it was not by chance that he met Monte. Gyuri is 78, he escaped communism and found asylum in Norway, and has lived his whole life in search of peace and joy. In his search he acquired many things that he thought would bring him happiness. Over and over he and Monte had long spiritual talks, but he still had so many questions and much opposition to accepting Christ. He asked us to pray for him because he was "haunted" by this decision to accept Christ or not. So, we sent a prayer letter to our praying friends, and we continued to wait.

July 31, Sunday evening, Monte went to visit Gyuri in his home, and stayed 4 hours. Monte came home after midnight, and said that Gyuri had prayed at 11 PM to receive Christ. Gyuri had said, "I don't know what I'm waiting for, this is really a simple decision!" Now the really amazing part is this - We had just received an email that night from one of those praying friends, telling us how burdened he was for Gyuri, and that he was prompted to pray for our friend.

We are so encouraged that God raised up someone across the world to pray at the right moment, and that that our dear friend put his faith in Christ. He said that he now has Jesus with him, before him and behind him.

Email ThisBlogThis!Share to TwitterShare to FacebookShare to Pinterest
Labels: Life in Hungary